If you don’t know about Subway Surfers (that’s very rare) then you might wonder why it’s so popular? Well, no one can judge a game without playing it, you must try it once. Below I have mentioned some of the best features of Subway Surfers.

Subway surfers is developed By Kiloo and Sybo Games. It has a great combination of sound effects and graphics which makes the game perfect and addictive.  Some of the best features about this game include a variety of missions, power-ups, special abilities and a broad selection of characters. Heading over to the concept there are many different characters to choose from, the default character is Jake. The moto of the game is to dash as fast as you can and dodge the grumpy inspector and his dog by dodging oncoming trains. Final words a great arcade game.

How to Play Subway Surfers on PC? 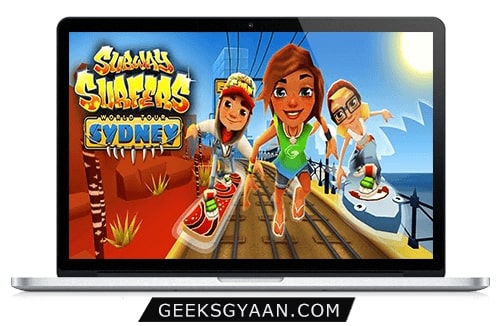 You might have heard about bluestacks? If not then bluestacks is an Android emulator that allows us to run Android apps on your PC. So one can easily play Subway Surfers using bluestacks, but bluestacks takes a lot of memory and freezes frequently on low-end computers. So for computers that don’t have high graphics we can run Subway Surfers pc version that runs very smooth and doesn’t consume high memory.

Below is a step by step guide on how to download and play Subway Surfers on your Windows PC. There are two methods one uses bluestacks while the other doesn’t.

Now you could enjoy your favorite Subway Surfers in high resolution on your pc. The controls are as expected. Use your mouse as a universal controller. To move left drag mouse on the left side, to move right drag mouse on the right side and similarly for up and down.

Steps to Download Subway Surfers for PC with Bluestacks

The controls are the same as mentioned above, The benefits of using bluestacks are you can get important updates of Subway Surfers and on the other side the pc version doesn’t allow us to do so.

That was a quick guide on downloading Subway Surfers for pc hope you enjoyed it, If you have any doubt regarding it then do comment below.