Clone Apps gives the much-needed dual access of any particular application simultaneously. Basically, clone apps are needed for using an application or play a game, with two different accounts at the same moment. To deal with the trouble of managing your personal and business profiles at any social platform like Facebook or WhatsApp here’s the list of best clone apps for Android and iOS.

These clone apps work amazingly with almost all the popular applications and games including WhatsApp, Facebook, Instagram, Clash of Clans, or Clash Royale which in fact do greed everyone for multiple account creation and access. Apart from this, you also get the advantage of theme customization and personalization of the cloned apps. Clone apps for iPhone and Android which we are listing below are extremely user-friendly and don’t invite troubles.

This App supports multi-accounts simultaneously online. It keeps work-life balance by the fast switch between different identities. Using this app, you will never miss any message from different friends. You can play one game from two accounts at the same time. It has a simple operation with simple and UI. 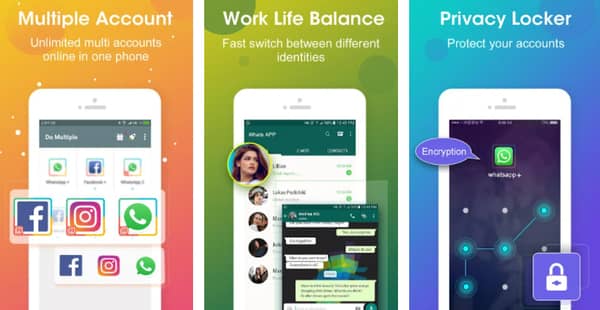 For using unlimited multi-accounts online in one phone. It’s a fast switch between different identities. In terms of privacy as well, this app comes with an inbuilt app lock and will protect all your accounts. You can play your main & Sub accounts, and get the double experience of each and every app. The app also has a lite mode for saving power and storage space.

2Account gives a unique way to hide any accounts that you don’t want to show others. This app fulfills the needs of using two space at one time. This clone app is compatible with almost all types of apps whether it is social networking apps or e-commerce. It can be used for gaming as well. With low battery and negligible processor’s power consumption, 2Accounts App provides amazing advantages in a compact size app. The candid interface of the app allows switching between different accounts very easily. 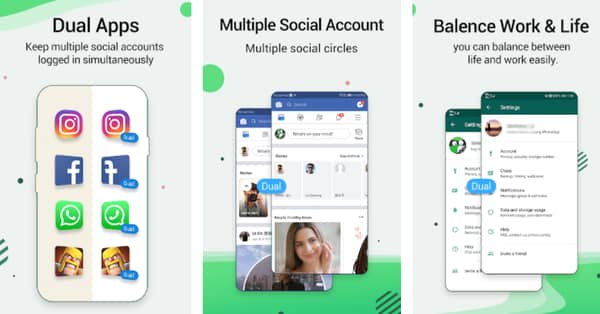 Install dual apps and keep multiple social accounts logged in parallel. Have this app and balance life and work easily. Enhance your social circles creating two accounts on social platforms. Now, double game and double the fun. Games, banking apps, Music apps, shopping apps, social apps, and all other applications can log in to the 2nd account in the dual app. You can import apps through just a tap of your finger. 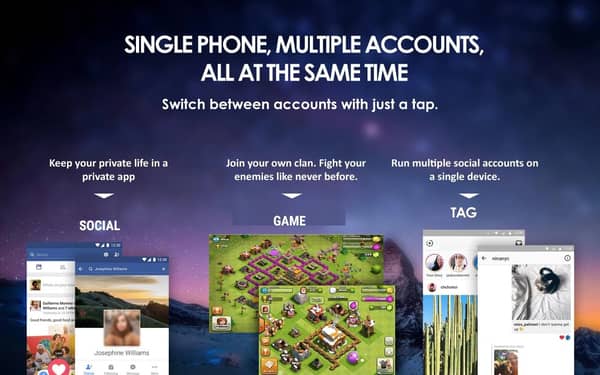 Duplicate apps, hide apps and keep them private, all these are possible through Parallel accounts. It supports all kinds of Apps, be it social networking, games, or shopping apps. It is good for optimizing battery performance and consume less RAM. The app has got a beautiful and stylish user interface with easy navigation. It’s also a lightweight application.

Another Android app to run multiple accounts on one device is Parallel U. It helps you to balance your public & private social accounts. It can easily switch two SNS accounts. Likewise other apps, this app also keep work-life balance. Try this app and expand the joy of Android gaming, because now you can manage 2 game accounts at one device. Create an insulated zone on your phone, inside apps inside and keep them private.

If you are looking for Apps to imitate on your Android phone, you must give MultiApp a try. It allows you to log in to multiple accounts for a single app and thereby enable you to get multiple accounts of a single application. It’s very easy and simple to use. Just tap and clone the apps. The amazing thing is, it enables the users to rename the cloned apps. Both the original and cloned apps run independently of each other.

Super Clone App lets you create identical and fully-functional clones for various applications and games without having to deal with root permissions. It is a widely used, reliable cloning software that facilitates multiple accounts on the same app for users. This App gained its fame for being cost-free and highly efficient altogether.

Parallel Space is one of the most widely used clone apps for Android where one gets to seamlessly create multiple accounts in their devices of the same apps. The app has a very simplistic and easy to understand interface, provides customizable themes and backgrounds in Parallel Space. People can hide apps on their Android device with the help of ‘Incognito Installation’.

App Cloner lets you create identical and fully-functional clones for various applications and games without having to deal with root permissions. It is a widely used, reliable cloning software that facilitates multiple accounts on the same app for users. The app gained its fame for being cost-free and highly efficient altogether. Unlike original apps, ones cloned by App Cloner, apps do not update automatically and let you use an older version that might be unavailable for use.

Dual Space is surpassing app for managing multiple accounts. As multi-login is in huge demand, Dual Space app satisfies this need and allows to use different accounts of the same. Many people are having two or more accounts of Whatsapp, Facebook or any other app to balance their professional and personal life. With the Dual Space app, they can operate both accounts simultaneously.

Parallel Space by Nitish Kamra for iPhone supports cloning of all widely used applications including Facebook, Instagram, Skype, eBay, and other high-end apps. Apple apps can easily be cloned with Parallel Space in a jiff. Unlike original apps, once apps are cloned by the App, it does not update automatically and let you use an older version that might be unavailable for further use through the original App.

You can have two different updates of the same app working alongside on your iPhone using Multip Space App by Jay Bakshi. The app comes with a clean, user-friendly interface anyone can get accustomed to. While you’re stuck with features of the developer’s choice in the original app, this app gives you the steering customization options to choose how the clone app looks and feels. It lets you assign a different name, icon, languages and color schemes to your favorite apps.

One of the largely used Clone Apps for iPhone, Phone Clone, makes sure you don’t lose your valuable data and lets you breezily switch between original and cloned apps. It upgrades your security, storage, user experience and overall control over the cloned apps. You can also set desired permissions to the cloned apps.

Multi Social App is light on your device and doesn’t take up excessive storage. This App not only help you to create a clone of your desired App but it also helps you to install the cloned app on your SD Card. Apart from this, it comes with great features that you can disable wake locks and auto-start. The app can also be converted into a floating window app, which adds multitasking feature.