Poco’s Twitter handle just delivered some sweet news! POCO X2, the much-awaited smartphone, is ready for launch. With the tagline “SmoothAF” and an image placing “X2” boldly in the center, the tweet also mentions the launch date to be 4th of February. 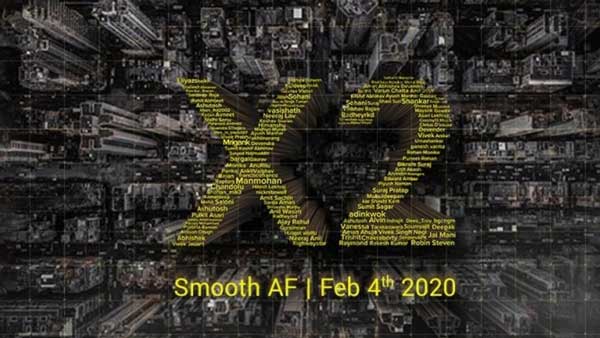 The tweet goes: “An Xperience that will make you go, “Bruh, it’s #SmoothAF”. #POCOX2 is arriving on Feb 4th, 2020. Want to know if your smartphone is Smooth AF?”. The tweet also contains a link to a Poco Website. POCO’s website went a step ahead a added a countdown timer for all of us who are too excited to count down by ourselves.

Poco X2 is much awaited because of the features it is promising to deliver. Talks are already doing rounds that the phone is going to be the best for gamers with the promise of an extremely high refresh rate. While we do not know the refresh rate that is being offered, high rates of refresh ensure that the gameplay is smooth for the user.

Another aspect that is getting people excited is the fact that the device will run the latest Qualcomm Snapdragon flagship chipset for the CPU. Everybody knows a flagship chipset from Qualcomm is something to wait for and invest in. These chipsets are usually found in flagship devices of most of the major mobile phone manufacturers. The CPU is also speculated to have a cooling system to help the device maintain an ideal temperature even as it runs heavy games. Further, at this point, it is definite that the device will possess fast charging technology to make recharging the battery as quickly as technologically possible.

While the dedicated webpage for Poco X2 confirms a Snapdragon chipset with liquid cooling, there are no details on the same out for the public. The page also confirms the presence of a 3.5mm headphone jack (Music lovers, you can breathe a sigh of relief!) at the base of the phone, which seems to have metal sides with curved corners.

Gadgets 360’s Poco X2 page shows that the phone will be launched with a 6GB RAM, Snapdragon chipset and a whopping 6.67-inch display, topped off with a 64-megapixel primary camera, a second 2-megapixel camera and the third one with 8 megapixels. It is also said to support storage expansion via microSD card up to 256 GB. X2 was spotted on Geekbench just earlier in January with the device running 8 GB RAM and android 10 out of the box.

Poco was under the Chinese electronics giant Xiaomi until it was declared as a separate brand. Accordingly, the first and only Poco phone to date was launched in late August of 2018. Having been a successful phone by its own standing, there is news that its successor, Poco F2, will be launched sometime in the first quarter of 2020.

The Secret Features of Firestick Nobody Tells You About

iPhone vs Android: Which is Better for Gaming?

Your iPhone Is in Serious Danger After Google’s Latest Discovery

What Are the Best PC Gaming Accessories to Choose to Improve...