As smartphones become affordable, a race began among brands to deliver as much value under 20,000 rupees. Vivo S1 was a result of this competitive drive. With a notch shaped like a drop on the front, a triple camera set at the back, an AMOLED screen, and a great battery backup—this one is definitely the best of Vivo mobiles under 20,000. Let’s deep-dive into the features of the phone that amassed a following of its own. 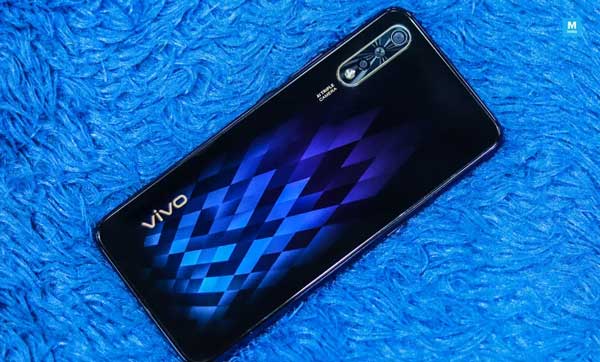 At just 179 g, Vivo s1 is sleek. The dimensions of the phone are 6.28 x 2.96 x 0.32 inches. Available in Diamond Black and Skyline Blue, it has an elegant gradient finish at the back. When exposed to light at different angles, the back panel reveals diamond patterns. With that said, Vivo mobiles under 20,000 deliver great aesthetics.

Vivo chose a rounded plastic frame for this phone, which makes it comfortable to hold. One of the most unique features of Vivo S1 is the dedicated Google Assistant button on the right side. The fingerprint sensor is in-display. The rest is standard as of other Vivo mobiles under 20,000. A Micro-USB port at the bottom, a 3.5mm headphone jack, a SIM tray on the left side, and buttons for volume on the right.

The Hardware Under the Hood

No other Vivo mobiles were armed with MediaTek Helio P65 SoC before this one was. However, the phones that came out after this one trumped it. This mid-range processor comes with 2 ARM Cortex-A75 cores and 6 Cortex-A55 cores. The former pair has a clock speed of 2GHz while the latter clocks at 1.7GHz. The GPU used is the Mali-G52.

Vivo S1 was launched in the following 3 variants:

The 4,500mAh battery comes with Dual Engine Fast Charging. This alone makes the S1 one of the best Vivo mobiles under 20,000.

There are 3 cameras on the back of the phone, and one is in the front:

The Software Under the Shed

The operating system is Android 9 Pie, along with Funtouch 9 being run over it. This is another thing that makes it one of the best Vivo mobiles under 20,000. The lack of an app drawer paired with a Command Center similar to iOS makes things convenient for the user. The LTE connectivity, Wi-Fi, and Bluetooth capabilities of the phone are standard, which is expected of this price range.

The Vivo S1 has a good battery life and ease of use which gives a good value for its price tag. However, camera and GPU performance could have been better. The processing capabilities are above average. In a nutshell, Vivo S1 seems like a good buy in this price segment.

While the price tag of this phone is affordable, you can make things easier on the wallet by getting it on easy EMIs or zero down payment. Bajaj Finserv EMI Network Card makes this possible for the customers. And with a network of 100,000+ stores in over 1,900 cities, you can get the smartphone at the lightning-fast delivery speed of 4 hours by ordering it online on bajajfinservmarkets.in.