A very well-liked media server software choice is Plex. Plex is one of the easiest-to-use media server tools, although it’s not the only one out there. The server functionality of Plex still takes centre stage, despite the addition of free, authorized streaming media, podcasts, and live over-the-air television.

As a result, you’ll need network-attached storage (NAS) device in addition to a great Plex client. View the top NAS for Plex alternatives, including servers and NAS boxes!

Plex can be compared to a DIY version of Spotify or Netflix. With a media server, you provide the movies, TV shows, and music files as opposed to streaming services like Netflix, Hulu, and Vudu hosting the content. You can then view your movies, TV episodes, and songs on a variety of devices from nearly anywhere after Plex organizes your library with metadata and box art.

However, Plex adds a tonne of cord-cutting capabilities like the ability to use an OTA antenna for live TV and DVR capability, as well as web series and podcasts, as well as free, legal, ad-supported streaming of movies and television episodes. It’s one of the greatest applications for cord-cutting as a result. You need a Plex server, a Plex client, and a library of movies, television shows, and music albums to get started with Plex. These media can be obtained via DVD, Blu-ray, or CD rips.

What is a NAS and How Does it Work?

An Internet-connected file storage system is known as a network-attached storage device. In this approach, files on a NAS can be accessed both inside and outside of the local area network. It functions similarly to a server but is more self-contained. A NAS box, for instance, is typically a ready-made system with a CPU (central processing unit), RAM, and hard drive bays.

Network-attached storage units frequently include processors that cannot be upgraded by the user and little RAM. Memory can occasionally be upgraded. A DIY server might have a Linux distribution (distro) installed instead of the proprietary operating system (OS) that many NAS devices from companies like QNAP and Synology ship with. The majority of NAS devices place a strong emphasis on simple setup.

Although servers often come in either more conventional desktop form factors or rack mount server footprints, they generally achieve the same task as a NAS. A server will often have more processing speed, memory, and upgrade potential. However, servers are frequently more expensive and less user-friendly.

The top-rated NAS for Plex overall is the Synology DS920+. With four hard drive bays and two integrated M.2 2280 NVMe SSD ports, you can fill your computer up with a tonne of storage and cache-accelerating solid-state drives. AES-NI hardware encryption is a feature of its quad-core Intel processor. 4GB of DDR4 RAM is already installed and may be expanded to 8GB. The DS920+ has four hard drive bays, but with the additional Synology DX517, it can accommodate an incredible nine discs.

The Synology DS920+ does hardware transcoding incredibly well. The DS920+ is an excellent 4K NAS for Plex thanks to its potent Intel quad-core processor. Unfortunately, there is a problem with hardware transcoding that can be easily fixed by removing a driver. It costs a little bit of money and regrettably uses two Gigabit Ethernet ports (1GbE) rather than speedier 10 Gigabit Ethernet ports (10GbE). The Synology DS920+ is still the finest NAS for Plex in 2022 for 4K streaming. 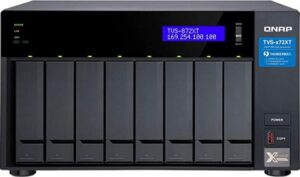 You’ll require a lot of CPU power while transcoding 4K content in Plex. A single or simultaneous 4K transcode can be handled by many affordable and mid-range NAS devices, however, 4K transcodes perform better on more capable hardware. The finest NAS for Plex 4K transcoding is the QNAP TVS-872XT.

An Intel Core i5-8400T Hexa-core CPU running at 1.7GHz and 16GB of expandable RAM make up its core. It has four LAN connections, including one 10GbE port. With two USB 3.1 Type-A hosts and two Thunderbolt 3 connections, connectivity is fantastic. There are eight huge hard drive bays and an HDMI 2.0 port that supports 4K 60Hz video output.

M.2 SATA SSDs can fit in PCIe expansion slots for effective storage with solid-state drive caching. The QNAP TVS-872XT is an exceptional Plex NAS that can handle multiple 4K transcodes with ease, deviating from the typical dual-core, low-power CPU-powered NAS boxes available on the market.

It’s unfortunately not inexpensive. However, you also get a home server fit for a small business, and the QNAP TVS-872XT is a robust home lab if you require a lot of storage capacity in addition to top-notch transcoding capabilities. You might also take into account the less expensive QNAP TVS-672X, which is powered by an Intel Core i3 and still offers excellent transcoding performance. The TVS-872XT is the best QNAP NAS for Plex if you want a top-notch 4K streaming experience. 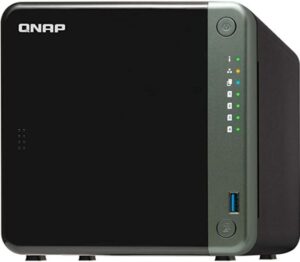 A reasonably priced 4K NAS for Plex is the QNAP TS-x53D series NAS machine. The TSx53D has two 2.5GbE ports and an Intel Celeron J4125 processor, and it supports up to 8GB of DDR4 RAM. A PCIe gen-2 slot and three USB 2.0 ports are present. Additionally, there is an HDMI output. It is available with two, four, or six hard-drive bays.

The QNAP TSx53D-series NAS can be utilised as a home theatre PC due to its video output capabilities. You can stream super HD videos from Plex using its 4K hardware transcoding. The Intel Celeron J4125 isn’t the most powerful CPU, though.

As a result, there will be a limit to the amount of simultaneous 4K transcodes you can accomplish. However, the QNSP TS-x53D is the finest inexpensive Plex NAS for 4K transcoding if you’re on a tight budget. 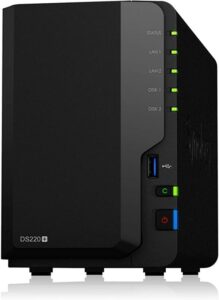 The best Synology NAS for Plex is the DS220+ media server, which is a reliable Plex server device. A dual-core processor with AES-NI encryption can be found. It can handle two simultaneous H.265 or H.264 4K videos to 1080p transcodes on the streaming side. The Synology DS220+ has 2GB of RAM out of the box, but it can be expanded to 6GB. Depending on the amount of RAID, the two hard drive bays can hold up to 32TB when using dual 16TB drives. The DS220+ is a cheap choice for NAS for Plex.

The dual-core Intel Celeron J4025 processor can transcode multiple 1080p videos and even 4K content. However, its 2GB of RAM might not be enough for demanding users. Additionally lacking are cutting-edge features like an eSATA connection and SSD caching. However, the exceptional expandability is made possible by a 1GbE LAN connector and three USB 3.0 ports. Additionally, the user experience is excellent. Setting up Plex and other media or file server applications is made easier by Synology’s software. The Synology DiskStation DS220+ is a low-cost video streaming server that doesn’t skimp on usability, cost, or excellent Plex support. 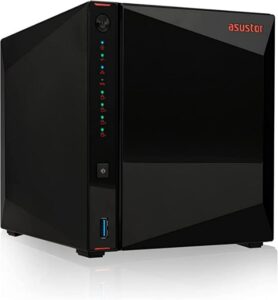 Although many customers prefer a headless media server, a NAS with HDMI support can be quite adaptable. Instead of using a distant computer, the machine itself can be used for file transfers and management. Your server can also act as a HTPC. The input/output (I/O) options on the Asustor AS5304T is among the best available on a home server. There are four hard-drive bays, an HDMI 2.0 output, and 4GB of RAM. An Intel Celeron J4005 processor is housed inside. The transcoding and streaming of 4K on Plex is excellent.

Asustor includes a number of options for direct video streaming to Twitch or YouTube. As a result, it makes a good NAS for both home lab users and makers. Although that is true of the majority of network-attached storage devices, it is somewhat pricey. Sadly, there aren’t any eSATA connectors or NVMe SSDs available for caching. The best Plex NAS with HDMI is still the Asustor As5304T. The Asustor AS5202T 2-bay home server is another option.

The proper hardware is needed to build a Plex server, and a server is crucial. You should think about the content you’re streaming in order to have the greatest Plex experience. This will help you determine how much processing and storage you’ll require. In this article, we have shared the three best NAS for Plex 2022.