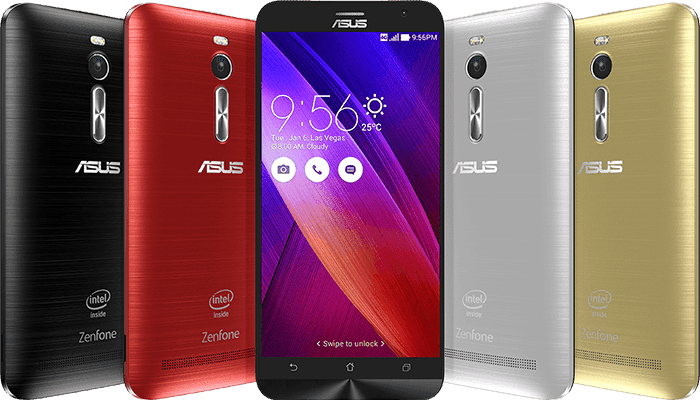 The new Asus Zenfone 2 is bundled with exciting and mind-blowing features on paper. It has 5.5” IPS capacitive display with corning gorilla glass 3 protection. The display now supports the screen resolution of 1920×1080 pixels with density of 401 ppi. Previous generation of Zenfone lineup has screen resolution of 1280×720 pixels.
The Asus Zenfone 2 is powered by Intel’s new Intel Atom Z3580 64 bit quad core CPU clocked at 2.3 or 1.8GHz and PowerVR G6430 GPU.
Asus Zenfone 2 has 13MP rear camera with dual LED flash which can able to shoot video 1080p at 30 fps. It also has secondary 5MP front facing camera.
The Asus Zenfone 2 is running on Android 5.0 Lollipop OS with Asus custom skin user interface called ZenUI. The ZenUI does offer a lots of customizations on regular vanilla flavor of Android.
The Zenfone 2 will be available soon (may be in Q2 of 2015) with different of choices of colors- Sheer Gold, Glamor Red, Qsmium Black, Glacier Gray and Geramic White. The accessories for these lineup will also available after launching of product.
The exiting feature of the Zenfone 2 is the RAM. It has 2/4GB of RAM. It is also packed with non-removable Li-pro 3000mAh battery. The Asus Zenfone 2 is 4G LTE enabled.
Asus Zenfone 2 is also an affordable smartphone as we have seen last Zenfone 2014 series. This phone costing around $199 before any taxes. However price will be differ for the 2GB/4GB RAM and 16/32GB versions.