Everybody, at some point, has wondered if they should go for a Desktop PC or a gaming laptop for their gaming needs. They have a valid justification for their choice as well. They both offer different things that appeal to different people.

But what about you? Ever had the same dilemma of having to choose between a gaming laptop or a Desktop? Other than the obvious differences between the two, there are few other aspects that would influence the mind of a buyer when deciding between the two offerings.

Differences Between A Laptop And Desktop 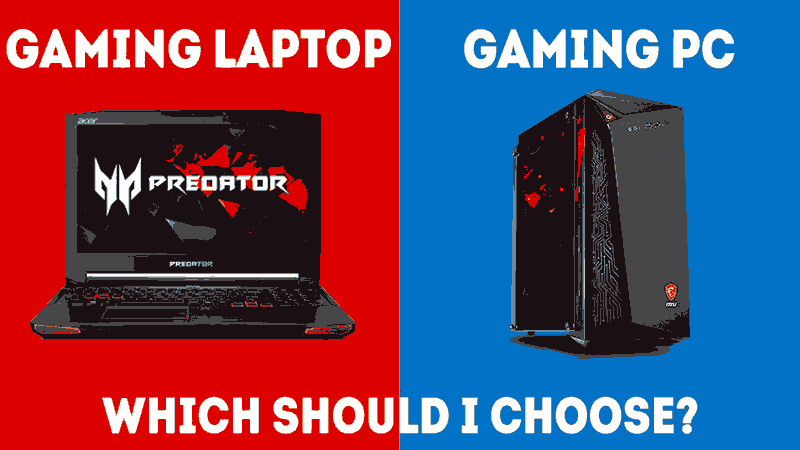 This is one of the most important points of distinction between these two. Performance is very important for any device because, without this, there is no point in shelling out all that money. The performance of a device depends upon the chipset used in it.

Desktop CPUs are much powerful than laptop CPUs as it can draw more power from the wall than a laptop can from a battery. Laptops are designed to use the least amount of power it can when on battery. This usually means when you are not gaming the laptop will clock itself to the slowest speed it can.

But that doesn’t mean that the laptop CPU is 50% less powerful. Manufacturers usually use technologies like HyperThreading to make up for the difference in core count.

Pre-Built Desktop PCs usually come with a basic chipset installed that is usually decent for gaming. But in case you require some more output for tasks like video editing then you need to have good knowledge about CPUs and go for a custom build PC.

A laptop has a lot of options straight away. Thanks to the very competitive market in the laptop category, you are spoiled for choice. Intel i5 chipsets, the ones that pack a decent punch in them, start at an affordable price, making it one of the best-recommended chipsets.

The same goes for the RAM of the device as well. Random Access Memory (RAM) is a hardware component in the device that determines how quickly something can be accessed and brought to the user for immediate usage. The higher the RAM is, the smoother the multitasking experience.

Also, RAM for desktop is cheaper than and those of laptops.

This is one of the most beneficial features of using a Desktop. The extent to which you can play and experiment on a PC is much higher than for a laptop. Laptops come with a standard build and therefore not much room for customizing.

However, PCs give all the power to you in case you want to switch components, like a better CPU, display, SSD, hard disk, RAM – all with an obvious increase in the price tag.

For PC it’s Upgradability and for laptops it’s portability. There is no arguing the fact that laptops were created to be portable. They have only been getting thinner and more efficient as time goes on, enabling you to game from anywhere.

PCs were not meant to be accompanying you on your business trips and vacations in the first place. Hence the answer to this is a no-brainer. checkout the Best Laptops For Portability in 2020.

These days both Desktops and Gaming laptops come with the same storage capacity of about 1 TB. While more hard disks could be installed on a desktop, the truth of the matter is that you probably will not require more than 1 TB in the first place. Additionally, both laptops and desktops now come with a combination of SSD and mechanical hard disks.

An SSD, or Solid State Drive, is much faster when it comes to a mechanical hard drive, therefore making it easier for you to power on your device from sleep. checkout the difference between Intel Optane Memory Vs SSD.

Gaming laptops are obviously expensive than gaming PCs. With an average battery life, dedicated GPU, and efficient CPU, one of these laptops would be around 800$ or 50,000 INR. On the other hand, you could build a sweet PC for the same price which could destroy such a laptop in terms of performance.

Unless you are willing to build a PC, it is difficult to find something that caters to all the requirements, and with an agreeable price.

To sum it up, it all comes down to portability. If you travel too much then gaming laptops are a good option. It has all the components to make your work and gaming easier, having been built for that purpose. The GPU, CPU, RAM cater to your gaming needs. The drawback of gaming laptops is its battery life, they usually last 3-4 hours.

If you are a hardcore gamer and your main purpose is gaming then I would suggest going for a Desktop. PCs are more powerful and cheaper than gaming laptops. Also, you don’t have to replace your desktop any time sooner. You can upgrade its old components and make it run like a new PC.

How to Choose a Laptop for Gaming?

If you have decided to go with a gaming laptop then here are some of the major specifications you need to focus on.

The dedicated GPU is one of the main components of a gaming laptop. It differs from an integrated GPU by the fact that the former has its own video RAM or VRAM. This type of RAM is essential when there is image data to be stored on the RAM. Also, it is important that the GPU also has the capacity required to run the games you throw at it. The Nvidia GTX cards are intermediate level and the best place to start from.

The popular CPU offerings currently are i5, and i7 by Intel and Ryzen 3, Ryzen 5 and Ryzen 7 By AMD. All of them are great for gaming laptops because of their higher clock speed; the higher the clock speed, the better the output. These also come with more cores (starting with 4 cores), meaning better battery efficiency, and the ability to handle more RAM. The choice between Intel and AMD is mostly up to you.

Intel processors are more expensive than AMD ones. But AMD provides slightly better performance at less price. Also, AMD processors are beast when it comes to gaming. The i7 and Ryzedn 7 is a beast and suggested for the newest titles at a premium cost, whereas the i5 and Ryzen 5 is the most balanced throughout.

As discussed previously, the higher the RAM, the faster and smoother a device is. However, while that is true, there is also another aspect of equal importance. That is the speed of the RAM. The speed is usually indicated with megahertz (MHz). For example, a 2300 MHz RAM. This means that you will be able to perform about 2400 cycles in a second. This speed is obviously better than a 1500 MHz.

Therefore, when choosing RAM, you have to pay attention to the speed and the capacity as well. Fortunately these days we get the option to increase the RAM capacity by installing more modules.

There are other components also that make or break the deal for a user, such as the display, the keyboard, the design language, etc. These are not being touched on as they are very subjective and do not take away from the points discussed above.