The video game company Activision Blizzard certainly cannot be accused of resting on its laurels following the release of Call of Duty: Warzone, which features King Kong and Godzilla in Operation Monarch.

The crossover gives gamers the opportunity to form a squad as these legendary beasts wreak havoc on Caldera. Since its inception from 2003, the Call of Duty video game franchise has released a game every year, with the exception of 2004, and in April 2021, the franchise celebrated the milestone of 100 million Call of Duty: Warzone players and 400 million sales of the premium Call of Duty game.

Combat themes are popular in the wider entertainment industry. For example, in the iGaming industry, there has been an increase in combat-themed slots and also the adoption of competitive promotions and offers, to keep fresh players coming back for more. There are titles such as 1942 Sky Warrior available, and the popularity of Godzilla themes has also contributed to the release of the slot game Zillard King. While this offering isn’t an officially licensed part of the franchise, it’s clear that gaming developers have cottoned onto the Godzilla trend and opted to create their own fantastical beast.

The advantage to these knock-offs is that there are multiple sites that have free offers listed here, and this enables casual players to have a go at the game without using their own money, which is certainly an attractive prospect when console games are, by far, substantially more expensive.

These titles highlight the popularity of the combat genre in many areas of the entertainment industry, featuring in countless video games and films and the two fictional monsters which have featured in movies and video games over the years.

Godzilla versus King Kong in movies

King Kong first appeared in the 1933 movie of the same name, which was created by Edgar Wallace and Merian C. Cooper, and since this initial offering, there have been 12 movies featuring the oversized ape. Godzilla first appeared in the 1954 movie directed by Ishirō Honda. The Japanese movie and distribution company Toho Co., Ltd. has produced 32 Godzilla movies, while there have been just four US movies featuring the giant sea creature. 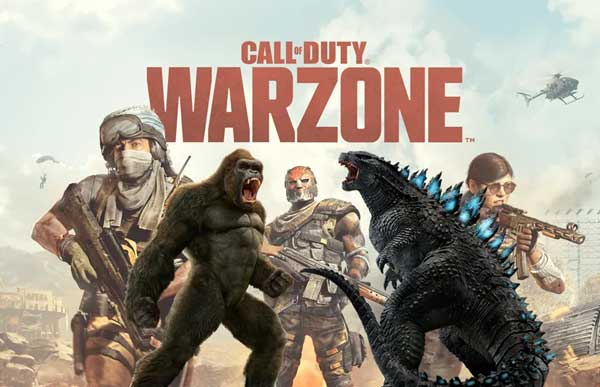 Crossovers in video games have become increasingly popular of late and the two fictional monsters also featured in the World of Warships Godzilla vs. Kong video game last year. Considering the popularity of these crossovers, it is easy to see why they have now made an appearance in the Call of Duty franchise.

In an interview, Ted Timmins, Senior Creative Director at Raven Software explained the gameplay concept behind the crossover: “What he likes so much is that old Call of duty Warzone players who have been there for three cycles now look at the event and say oh cool we have got a little bit of Resurgence and a little bit of Power Grab here while a new player comes in and just this visually incredibly stunning event by taking the big screen out of the cinema where we all love those great monster movies that made cinematic history and bringing it all to your screen and putting you in control.”

Call of Duty continues to go from strength to strength and with a new title released every year, we can expect to see further innovations and crossovers in the future as Activision Blizzard strives to keep the game fresh and keep fans coming back for more.