There is a huge demand for streaming services like Netflix, Hulu, and Amazon Prime. There are a lot of over-the-top (OTT) streaming video on demand (SVOD) platforms that are charged, but there are also a lot that are free. However, physical media collections are still quite valuable.

For instance, it can be challenging to find specific movies and TV series on streaming platforms. Although cinephiles prefer DVDs and Blu-rays, a digital media library has several advantages. Additionally, you may arrange your videos, TV episodes, music, and even photos on a media server for viewing nearly anywhere. Emby is a top-notch media server alternative to Plex. You will need a home server to get started with Emby. Check the top Emby server options for 2022! 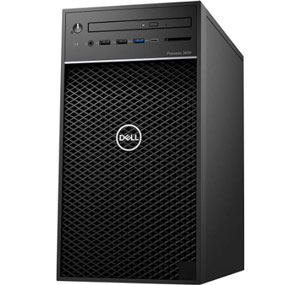 The Dell Precision 3630 workstation is a beast and provides the greatest CPU for an Emby server if you’re a serious homelabber who needs a tonne of storage space and a powerful CPU that can stream in 4K. Its hexa-core Intel Core i7-8700 processor gets a PassMark score of almost 13,000. As a result, it’s the top 4K Emby server hardware available.

The Dell Precision 3630 has exceptional expandability because it is a tower computer. Almost every component, including the CPU, RAM, and hard drives, is upgradeable. There are four hard drive bays available, each of which may hold a 2.5-inch or 3.5-inch drive. Furthermore, the Precision 3630 is energy-efficient thanks to its 300W power supply.

The Dell Precision 3630 costs over $1,000 USD, which is regrettably quite pricey. And even then, there isn’t much storage room. Additionally, it is bigger than the typical NAS device and is roughly the size of a typical PC. While not gigantic, that has a sizable footprint.

The Dell PowerEdge T30 is a fantastic option that costs around $400 and is ideal for 1080p transcodes even though it isn’t as capable for 4K transcoding. The Dell Precision 3630 is a great option if you need to stream in 4K because it has a powerful internal hard drive, is upgradeable, and has a top-notch CPU. 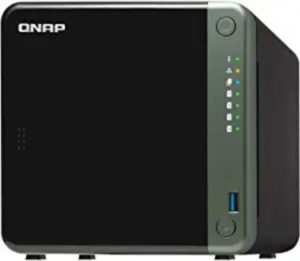 For the majority of customers, the QNAP TS-453D is the finest NAS for Emby. Even with its tiny Intel Celeron J4125 quad-core CPU, it enables four hard disc bays and 4K transcoding. The TS-453D is available with 4GB or 8GB of RAM. A 10Gb Ethernet jack is present. Additionally, the TS-453D supports VMware and Hyper-V virtualization software. Although it comes with 4GB of RAM, you may increase it to 16GB. This QNAP NAS has an HDMI connector built in. The TS-453Be should work perfectly for most people. It is feature-rich and upgradeable.

However, the TS-453D will cost more than other models. That is the same as any other NAS device. The average network-attached storage device has a poor price-to-performance ratio when compared to more conventional server hardware. The QNAP TS-453D is still a great option as a 4-bay NAS that supports 4K transcoding and playback. You might also think about the somewhat more costly 2-bay TS-653D or slightly cheaper 2-bay TS-253D. 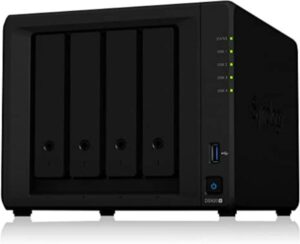 One of the greatest Emby server configuration alternatives for 2020 is the Synology DS920+. It is a 4-bay NAS and has 4GB of DDR4 RAM that can be upgraded to 8GB. Additionally, the Synology DX517, which costs almost as much as the DS920+ itself, allows for expansion to 9 discs. Without employing a storage drive bay, cache acceleration is possible using the two M.2 2280 NVMe SSD slots. Its Intel quad-core 2.0 GHz processor is capable of transcoding from H.264 and 4K H.265 to 1080p.

The versatile Synology DS920+ also comes with two camera licenses installed, and you may add more. As a result, it makes for an excellent home media server, file server, and even a storage device for security camera video. The 2-bay DS220+ offers a respectable feature set for a budget-friendly option, while the DS420+ is similarly equipped, however, it can be expanded with the Synology DX517. The 2-bay NAS known as the DS720+ may be expanded to 7 bays with the DS517.

The Beelink GS-King X is a stylish and functional media player. With a powerful Amlogic S992X-H processor, 4GB of RAM, and 64GB of internal storage, it runs Android, not Android TV. The Beelink GS-King X also has two hard drive bays, each of which can hold up to two 3.5-inch desktop HDDs, for a total storage capacity of 32TB. Additionally, since Emby Media Server for Android can be installed, the Beelink GS-King X functions admirably as both a streaming set-top box and a small NAS.

The inputs and outputs (I/O) are very amazing. There are four USB ports, an Ethernet port, Wi-Fi, Bluetooth, an analog headphone jack, an HDMI output, an SPDIF audio jack, four RCA outputs, and two balanced output connections. The GS-King X, however, uses an Android version tailored for tablets rather than the standard Android TV version.

As a result, Netflix playback in 1080p cannot be handled by the GS-King X. However, that limitation is undoubtedly one of software, not hardware. The Beelink includes an 8GB microSD card with the pre-loaded Kodi operating system (OS) CoreELEC in addition to its built-in Android OS. The Beelink GS-King X is pricey, but it functions as both an Android streaming box and a network-attached storage device. 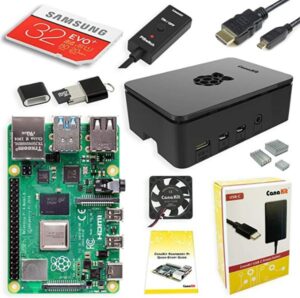 A single-board computer the size of a credit card is the Raspberry Pi 4. (SBC). Emby can be put into place on the Pi 4 because of its interoperability with Linux. It’s a fantastic inexpensive Emby media server alternative with a $35 starting price. The Pi 4 is a startlingly capable NAS solution, with very low power demand and a tiny footprint. The Raspberry Pi 4 can handle around three to four simultaneous 1080p streams, but it cannot transcode at all. Unexpectedly, you can even stream a 4K file that has not been transcoded. The absence of transcoding is the sole significant drawback. The Raspberry Pi 4 is a cost-effective option if you usually broadcast content from your Emby server to clients inside your house.

There are several different types of Emby server hardware available. There are options for every need and price range, including low-cost single-board computers like the Raspberry Pi, NAS devices, and home servers in the desktop form factor. The Dell Precision 3630 performs flawlessly when streaming in 4K thanks to its potent Intel Core i7-8700 hexa-core CPU.

The QNAP TS-x53D product series supports 4K transcoding at a variety of price points. The DS920+ from Synology is pretty powerful. The Nvidia Shield TV might be viewed as a dual-fold client and server for Emby. A similar clever solution is provided by Beelink’s GS-King X, an all-in-one NAS, and Android streaming media player.