Samsung’s latest wearable product, the Samsung Gear S3 has been launched in a Pre – IFA event in Berlin, Germany. Soon, it will flood the markets within few weeks. The Gear S3 smart watch is much bigger, bolder and better than its predecessor smart watches.

The Samsung Gear S3 Classic smart watch possesses a classic and an elegant design that includes prominent Round – shaped buttons. The Samsung Gear S3 Frontier variant is more of a rugged sporty version making it more durable than the Classic variant.

Both the variants include a Super AMOLED display that makes it feel like an actual wristwatch but there is a lot more to it. The Crown, Bezel and the Crystal enhance the functionality and beauty of the Smart watch.

The smart watch is Water – proof and dust – proof too. Now, this is really an awesome thing in a smart watch of this quality.

The Gear S3 Smart watch has the usual 22mm wristband which is available very easily. So, if you want to replace it, you can definitely get a band of your own choice.

Now, here comes the technological manipulation. The Gear App Store offers you 15 pre-loaded designs for free. You can download them from the App Store and make the Smartwatch more customizable. Whenever you get bored of one theme, you can install any one of the 15 themes and keep changing it continuously.

Some of the themes in the App Store are: 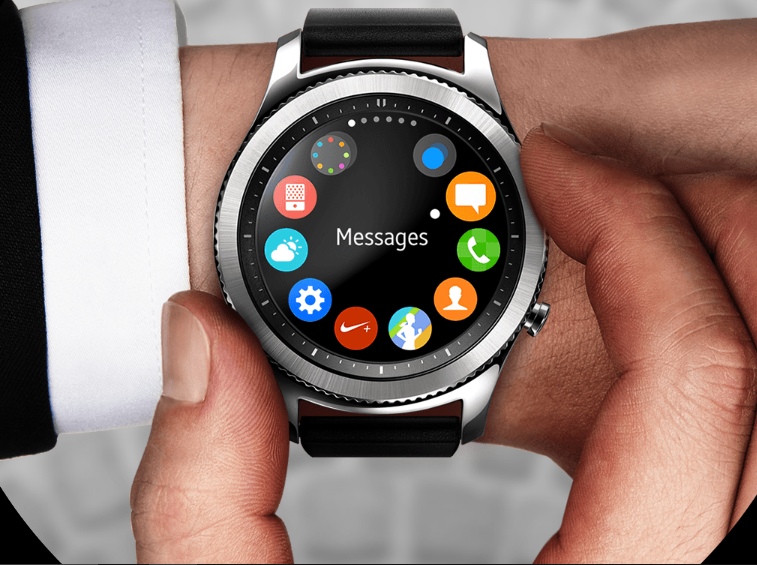 The Gear App Store offers more than 8,000 Smartwatch applications for the users to increase the productivity of the smartwatch S3. You can, therefore, download all the important applications that you cannot live without. A 4GB memory is more than enough on a tiny smartwatch.

The Samsung Gear S3 also includes the S Voice app. It is a replica of the Siri App. Now, you can talk to your Smartwatch and make it work for you. The S Voice application can perform a web search, can open an app, play a particular song for you, call a friend and so much more on your command.

The Gear S3 smartwatch includes a built-in GPS that is much more durable and faster. It helps you to explore the world without deviating from your planned route. It includes a 380 mAh battery which makes it work for a couple of days without charging.

The Gear S3 smart watch includes a built-in Speaker and a Mike too. Now, you don’t need to carry your headphones with you all the time. You can attend your calls and messages directly using the S Voice application and talk using the built-in Microphone. However, you may need to download a voice calling application from the Gear App Store.

The Payment technology has now improved and with the Gear S3, it has been simplified. You can now make your payments using the Magnetic Secure Transmission (MST) and also the Near Field Communication (NFC) technologies.

The Gear S3 provides an application for managing your Health. It comes with an S Health application, that generates reports of the exercise, work schedule, workout sessions, running sessions and much more to keep you fit and healthy.

The S3 smart watch is a Tizen-based Wearable Operating System version 2.3.1. It has an Exynos 7270 chipset with a dual 1.0 GHz processor making it powerful and robust. The Operating System may get some updates in the future. The Samsung Smartwatch can be synchronised with a Smartphone with an Android version 4.4 or later.

The Gear S3 includes a  768MB RAM Memory and a 4GB Internal Memory. It makes the watch extremely super fast for multi-processing and multi-tasking.

The smart watch S3 is Water – resistant as well as Dust – resistant. The Frontier variant has got IP68 ratings with MIL – STD – 810G technology. The touchscreen and the display LED is extremely high quality and water resistance too.

It includes numerous sensors such as HRM (Heart Rate Monitor), Accelerometer, Gyro Barometer, Ambient Light Sensor, Altimeter and much more other sensors. This makes the Gear S3 smart watch much more reliable and increases the productivity of the smart watch.

The Gear S3 smart watch has a battery with a capacity of 380 mAh. According to the company, it can work for around 4 day’s with maximum usage at one full charge cycle. It also includes WPC Inductive Wireless Charging technology. The smart watch may work for more than 4 days depending on your usage. If it is kept in standby mode and not much used frequently, it will definitely work for more than a week. So, you can take definitely take the Gear with you on a trip without any worries of discharging.