Android emulators are quite popular, but what about iOS, can we emulate iOS apps?  Well technically yes, but some features might be limited depening on your hardware. If you want to experience the Apple ecosystem or want to test iPhone apps on your PC then these emulators might come very handy.

Here are the top iOS emulators for Windows and Mac.

The Best iOS Emulators for Windows 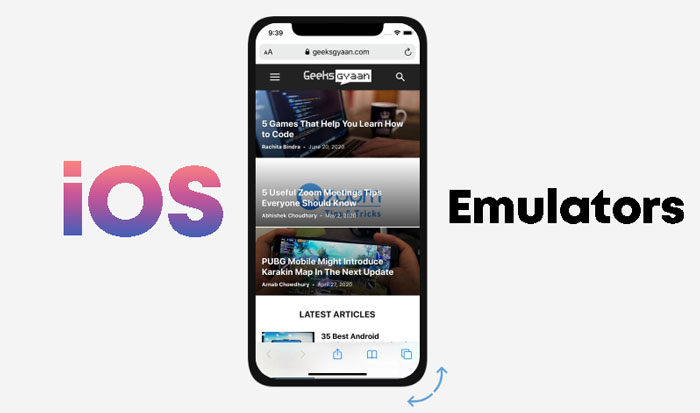 You don’t have to buy a new iOS device to test it. When Apple’s official showroom is far from home, an emulator is your best friend. This particular section meets the requirements of all Windows users who want to try iOS.

The next one to run iOS apps on PC is Smartface. The emulator is more aimed at professional users. Developers use this emulator to develop iOS apps and test the apps correctly to determine if they are operational or not.

Smartface primarily aims at professional users. For this reason, the emulator starts at $ 99. However, if you want to try it, there is a free version. This works best when you need to test cross-platform iOS apps.

It’s also important to know that Smartface is probably the most feature-rich iPhone emulator available.

The best thing about this emulator is that its web-based. The emulator is not only free but also simple and easy to use. Configuration does not ask a lot of effort, and therefore, almost anyone can configure it.

It is one of the best iPhone emulators that focuses on the simplicity of; Users only need to sync the app or apk package with this emulator, and they are ready to go. Once the emulator gets configured, you can use it as you like.

Whether you’re testing cross-platform apps or just want to play exclusive iOS games, it has it all.

Appetize.io is a unique version of iOS emulators to run iOS apps on PC. Not only can you run iOS apps with it, but you can also develop cross-platform apps in the cloud using this emulator. The download and use of the emulator are free for the first 100 hours.

After that, however, you will be charged a nominal fee of $ 0.05. It is not a bad price for an emulator to facilitate many people.

Installation and use of this emulator are easy. All you have to do is download the emulator, install it with the AIR framework, and get started. Once everything is ready, you can start using the iPhone AIR with ease.

Another fantastic offer on the list is iPhone Simulator. The iPhone simulator is primarily used for games because there are no advanced functions. However, the good thing is that this is not a very bad thing at first.

For starters, you can easily replicate an iPhone and play as many games as you like on it. The support is unlimited, and you will have no problems. Since the objective of this simulator is to focus more on the game side, the graphics are amazing.

Another iOS emulator to run iPhone apps on PC is Xamarin TestFlight, the first official Apple emulator to test apps developed for iOS. However, there are certain restrictions on the use of Xamarin. For starters, the emulator only runs apps designed to run on iOS 8.0 or later.

Compared to some other options available on the market, proper Xamarin TestFlight execution is a bit tricky. It is more suitable for professional use than regular use but works well in both cases. If you can cross the learning curve, TestFlight proves to be an excellent simulator for the iPhone.

Next up is Mobile Electric Studio, a professional mobile iOS emulator used by professionals. It offers many features that are suitable for both iPhone and iPad web development.

The free trial version is certainly available, but the full version is available on the website for $ 40. While it may be expensive for many people, it’s undoubtedly an excellent investment to look for a complete alternative that works.

Simply put, if you’re a professional developer looking for more than just an emulator, Electric Mobile Studio is a great emulator that you should consider.

Most of the emulators that are tested or commented upon generally focus on everyday use. This means that they do not contain much substance.

However, there are a few exceptions that go beyond the best possible emulation experience. An example of this is Ripple, a brilliant emulator that tests old and newly developed applications, as well as the older app.

The great thing about Ripple is that it is a Chrome extension, so you don’t have to go through the sophisticated setup process to get it up and to run. The software is still in beta, so there will be some bugs, but for the most part, it works great.

iMAME is less of an emulator for the convenience of iOS testing and is more focused on allowing you to play iOS games on your PC. There are have seen many people who want to play exclusive iOS games on their computers, and iMAME is a perfect choice.

The great thing is that the software is low on resources and will have no or other similar problems. But at the same time, it’s more player-focused shows that it will cater for more specific features than the overall iOS experience.

Still, iMAME is a pretty fantastic emulator for iOS that will run all the games you want to play.

If you are familiar with Xamarin and his incredible dedication to the simulator market, you would like to know about the remote iOS simulator they have developed. The good thing is that with this emulator, you will have no problem testing iOS applications on your PC. If you are a developer or someone who wants to see if the Apple ecosystem is for this emulator or not, get the job done without a problem.

The striking thing about this emulator is that one can easily debug with the help of Windows Visual Studio Enterprise. One more thing I’d like to mention here is that the emulator makes the whole experience that much easier, and you don’t have to worry about a thing. The software is simple and easy to use.

The first one on the list is MobiOne Studios. With this emulator, users can quickly test different iOS applications or games on their computers. Also, the emulator needs no resources at all, so you can run it on almost any device without worrying about hardware limitations.

The emulator is also very suitable for developers who want to develop cross-platform applications for smartphones. Last but not least, MobiOne Studios can even trigger status notifications that play full iOS notifications.

The best iOS emulators for Mac

Many people may find this ironic, but if you are a Mac user and still want to test your iOS apps to make sure they work correctly, the iOS Emulator for Mac is for you.

Fortunately, some iOS for Mac emulators are available for download, but not available in abundance, so you have a few options. However, since they were developed for the Mac, you can expect many nifty elements in terms of the Mac ecosystem.

Another name in the Mac space is none other than Appetize.io, and I’ve seen a lot of people compare it to App.io for the right reasons. The two emulators have some things in common and make them a competition.

Like the Windows version, the Mac version is created with great finesse and to streamline the experience and make it as smooth as possible. The test phase went well, although it is more focused on developers.

Starting this program is a little slow because loading all the assets takes some time. Once this is done, the whole process becomes fluid and streamlined.

The latest emulator for Mac is Xamarin TestFlight, an emulator that is now owned by Apple. It is not free, and the configuration is a bit complicated, but the good thing is that it works eloquently.

It is more focused on developers and people who want to test their cross-platform websites or apps in the iOS ecosystem, but I can assure you that it works fine with no issues.

On Android or iOS, emulators become an essential element of both ecosystems. Mainly because developers prefer to test their applications before submitting them for publication correctly, it is necessary to note that a device is much more expensive than using an emulator.

You can also use most emulators to test cross-platform applications to see if they work or not. Compared to Android emulators, iOS emulators are not that numerous, but they are still available.