Are you looking for the best emulator for PUBG Mobile? Well PUBG Game has gained a lot of popularity due to its immersive graphics and gameplay. It is an action-packed game in which 100 players land on a large island to survive by fighting with other players all over the map.

The jaw-dropping visuals and graphics of the game are powered by the Unreal Engine 4 which enhanced the experience by rich details and realistic gameplay. The energy and emotions get alive due to the high-quality audio and 3D sound effects in the PUBG.

As the map is big, playing the game is so much fun on PC. Yes, PUBG is the game that was originally developed for PC and later on looking at the popularity of Android gaming on smartphones, PUBG Mobile version is launched. The game is perfectly configured for PCs and integrated well with the mouse and keyboard controls, saving the trouble of individually mapping them.

So, for all those PUBG lovers who wanted to play the game on big screens of PC, this article is for you guys. Don’t miss reading it!

How To Play PUBG Mobile on PC

Android, since its inception, has largely evolved and continues to be, providing for breathtaking gaming, graphics, and sound quality. Still, it has a long way to match the PC benchmarks. Although, the Windows version of many popular games are there still many classic & exclusive Android games can’t be played on PC.

To play and enjoy PUBG Mobile game on PC, with better controls, and on the bigger screen, the Android emulator is the only way. There is already an alternate version of PUBG for PC called PUBG Lite, but the Android version has quite some differences and hence arose the need for finding the Best emulator for PUBG Mobile on PC.

What is Android Emulator 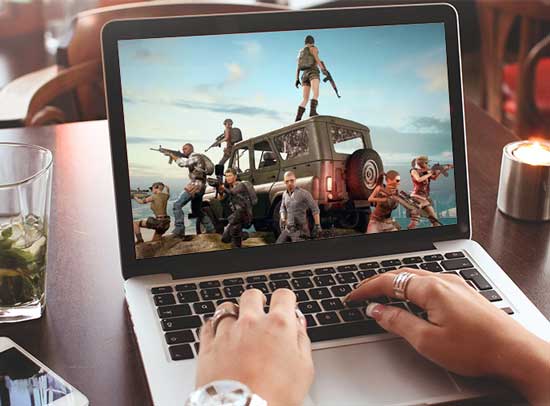 You must be searching that Which is the Best Emulator for PUBG? We are sure your search will end here. Android emulator, simulate an Android interface on Windows. It’s free and reliable with the least chances of lags and bugs. There is an army of Android emulators available, but if gaming is the cornerstone, Tencent Gaming Buddy, BlueStacks, Nox Player, and many others are on the list. We’re explaining all of them one by one.

Phoenix OS is one of the best Android emulators for low-end computers. Other emulators use much resources as Windows is running in the background, so there is very less resource available for the emulator. Phoenix OS on the other side is an Android-based Operating System since Windows is not running in the background the performance is much better as it can use all the resources available.

Phoenix OS offers a more tactile and precise control method as compared to other emulators. Users can hold the hotkey for toggling ADS, use the spacebar to jump and even open doors with the ‘F’ key. The best part about Phoenix OS for PC is that it is designed for low-end computers. The traditional Tencent gaming buddy causes optimization problems with low-end computers but this emulator allows you to run the game on much lesser resources.

It is Tencent Best ever Emulator for PUBG Mobile. Tencent Emulator helps users play both PUBG: Army Attack and PUBG: Exhilarating Battlefield on their computers, apart from the standard Android version. The program is specifically developed for PUBG Mobile and thus it is very easy to install and has been optimized to give the best results.

Another advantage is that users can shift back and forth between using keyboard commands or navigating via the mouse. Since playing the game on a desktop offers superior controls than a mobile device, Tencent Gaming Buddy Emulator ensures equality by only matching you against other players who are also using the PC.

Tencent Gaming buddy requires a good GPU, so you might face lag while playing on a low-end PC. You can use the below settings to optimize it properly. 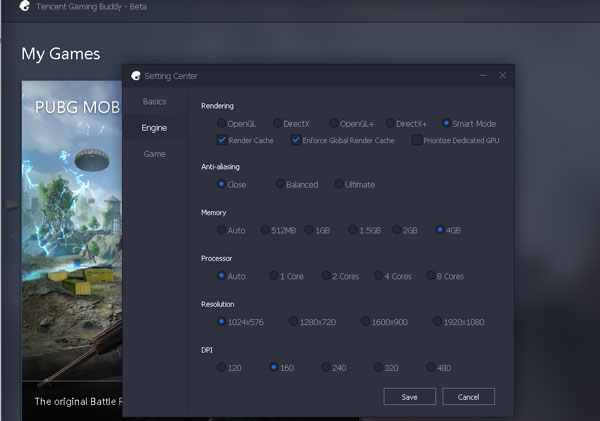 Nox Player – An another Android emulator that creates a virtual Android gaming environment on PC and is damn easy to do so. Assigning controls on keyboard and mouse in a tactile way is what Nox Player is famous and opt for. For PUBG such controls bring smoothest gaming experience as never before even on Android phones.

It coordinates the high performing PUBG game and its graphics format. Although it’s based on a slightly older version of Android 4.4.2 & 5.1.1 yet outdo Android smartphones when it comes to gaming. With X86 and AMD systems, Nox is perfectly compatible. It provides for multiple instances, screen recording and capturing screenshots too. It can also be rooted. Moreover, CPU and RAM usage can be pre-assigned on demand.

One of the oldest Android emulators which continuously evolved with time is BlueStacks. BlueStacks 4 is the latest and is expected to provide many additional features in 2019. This free Android emulator offers quick installation of PUBG game by simple drag and drop. For PUBG game lovers, BlueStacks is perfect with smooth and customizable controls. BlueStacks is ultimate for running all types of Android apps besides PUBG and is designed for all.

Another facile and highly compatible Android emulator for PUBG Mobile on PC is none other than Andy. Andy is mainly designed with the focus on productivity and developer’s purpose. However, it’s not a bad idea for PUBG gaming on PC. It’s free, fast and reliable. Andy is mostly preferred due to its ability to download Apps directly from the web browser. With Andy, switching between windows and Android is seamless with a single tab.

It’s an Android emulator mainly for playing games like PUBG. LD Player facilitates the running of multiple accounts parallelly. Larger PC screens bring bigger adventure and fun in playing Android games with identical features as that of Android. Similar to other Android emulators, LD Player also provides for mapping controls with keyboard and mouse. It’s faster and a stable emulator for all.

Similar to other best emulator for PUBG Mobile on PC, Remix OS is great for mapping and customizing keyboard shortcuts for enjoying PUBG game. Other productivity apps also run smoothly but it’s incapable of installing the Android app. The interface of Remix OS Player is appreciable for easy and simple navigation. Screen orientation rotation is possible here. Remix OS can also be installed through booting the USB device without having to actually install it.

For Android versions from Jelly Bean to Lollipop, MEmu is for all. Though the graphics are comparatively poor, gaming is not completely denied. With Intel, Nvidia and AMD chipsets, MEmu is compatible. It easily installs PUBG Game without any ado. Keyboard and mouse mapping is supportable for smooth operations. It enables screen recording and facilitates capturing the screenshot.

These were some of the best emulators for PUBG Mobile on PC. Comment down your favorite one.