The Task Manager is one of the integral components in almost all versions of Windows. You may have commonly used it to force close apps and services when they are stuck. It is quite easy to use and can be used by novice users and system admins alike.

In case you’re completely new to the Windows Task Manager, then one of the first things to know is how to open it. In this article, we have listed the various methods, tricks, and shortcuts to open Task Manager in a number of ways. Without further ado, let’s get started with the methods.

Fastest Way: Use the Keyboard Shortcut

One of the simplest and quickest ways to open the Task Manager is to use the keyboard shortcut defined in all versions of Windows. You can use the “Ctrl+Shift+Esc” combination on your keyboard to directly bring up the task manager, regardless of the app you’re using.

Note that in some cases, this combination may not work. This includes system freezes and other apps that block key presses when not working properly. Also, in case you don’t have access to a keyboard, then you can also easily open the Task Manager with several other methods listed further down the list.

Another simple way to access the task manager in Windows is from the GINA screen or the more commonly called “Security Options” screen. You can access this by pressing the “CTRL+ALT+DELETE” keys on your keyboard simultaneously.

Doing so will bring up various security options like “Lock”, “Switch User”, “Sign out”, “Change Password”, and “Task Manager”. Tap on the last option in the list to open the Task Manager. This method works best when you cannot use the previous technique and when your system freezes.

Opening Task Manager from the Power User Menu in Windows 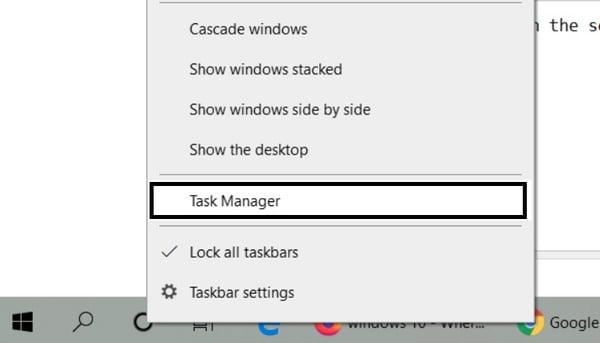 Another way to bring up the Windows power options is to use the integrated shortcut. Press “Windows+X” on your keyboard to bring up the menu and simply tap on “Task Manager” to bring it up.

A simple way that to the taskbar that is quite similar to the previous method is to open up the taskbar menu by right-clicking on it and tapping on the “Task Manager” option. This can be done when you have full access to the desktop and the operating system is working normally. Note that this method doesn’t work on Windows 11.

Using the “Run” feature in Windows to Open Task Manager 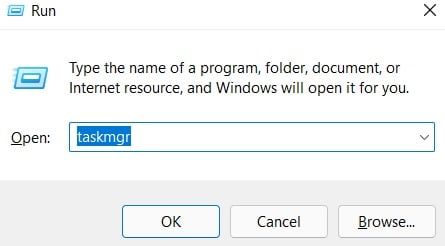 Another great and simple way to run Task Manager is to open the “Run” window and type in a simple command. To do so, you first need to launch the “Run” window by pressing “Windows+R” on your keyboard. This will bring up a small window, on which you need to write “taskmgr“, without quotes.

Once done, tap on “OK” to start the Task Manager. In case you cannot access a physical keyboard, you can also bring up the “Run” menu by right-clicking on the Windows icon and selecting “Run” from the power menu. You can also use this method in case your Windows Explorer has crashed. 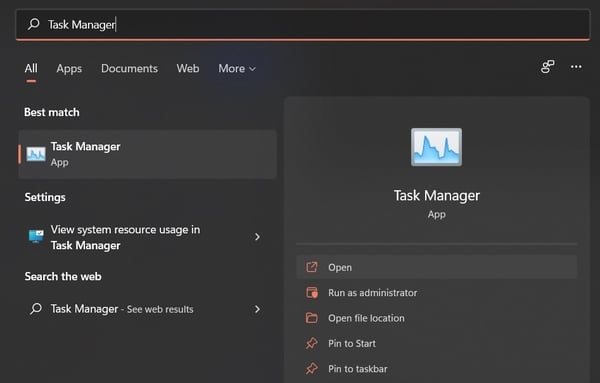 You can also easily access the Task Manager from the Windows start menu. To do so, tap on the Windows icon in your Taskbar and search for “Task Manager”. Tap on the first result that comes up to open it directly. Also, you can scroll down the list of apps on the left tab to find the Task Manager at the bottom of the list and simply open it from there. 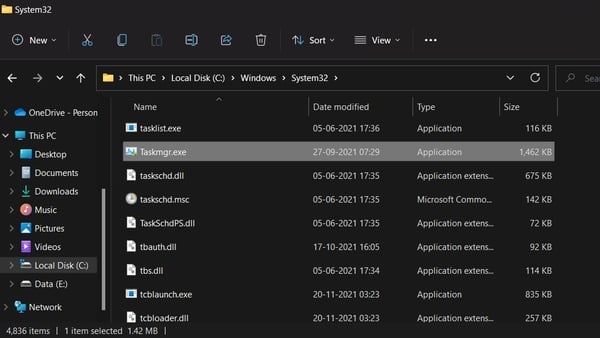 Similar to other apps on your PC, Task Manager also can be run by directly double-clicking on the executable file located in the “System32” folder on your system. To do so, first, navigate to “(Windows Install Directory) > Windows > System32“. Once done, scroll down to locate the executable file named “Taskmgr“. Double-tap on it to open the Task Manager.

Pin the Task Manager to the Taskbar for Easy Access

One way to quickly access the task manager on Windows is to pin it to the taskbar. You can do so by following the steps listed above to locate the Task Manager executable. Once you have access to the executable, drag and drop it on the taskbar to pin it to that location. Now you can easily access the Task Manager by just clicking once on the icon.

Creating a Shortcut on Your Desktop to Access the Task Manager

You can create a shortcut on your desktop to get direct access to the task manager. This can be easily done by right-clicking on the desktop and then selecting “New > Shortcut”. Once done, you should be presented with a Window that asks for the location of the executable.

By clicking on “Browse”, navigate to the location of the Task Manager as elaborated in the previous methods. Select the executable and then tap on “Next” to type a desired name for the shortcut. Finally, tap on “Finish” to complete the process.

In case you need to run the Task Manager without the help of using Windows Explorer, then you can do so by using a simple command on the CMD interface. First, open CMD from the Start menu and then type in the command – “taskmgr” to directly open the Task Manager.