In just 2 years, PUBG has left behind all the mobile games and became a new sensation. PUBG addicts can do anything to increase their PUBG ranking. This article explains everything you need to know about the PUBG Mobile ranking system. The ranking system is adopted by the PC version of the Player Unknown’s Battlegrounds. With this, the PUBG battle has now become even intense showing worldwide ranking. This means that now all the PUBG players can see their points and ranks against the world champions.

However, players should mind that ranking has nothing to do with the ‘Levels’ in the game. You can continue to level up by playing more and more PUBG game. To increase the levels, you need to earn more and more XP to unlock special rewards. It’s therefore interesting to know how the algorithm of the PUBG ranking system works. Unlike 8 Ball Pool like games, PUBG Mobile will not pair you with the same rankers instead it check your playing history and decide your competency that how skillful you are against a given player.

So, In-all higher ranking is desirable by all the PUBG fans to show off your gaming skills and ability. Read more about PUBG Mobile ranking system here – 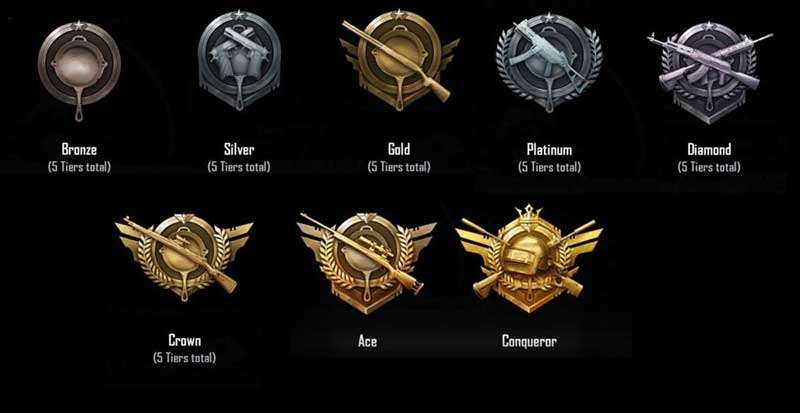 PUBG Mobile ranking system is divided into eight broad ranks and five sub-ranks in each rank below ‘Ace’. So, there’re overall  6 X 5 = 30 + 2 = 32 ranks in PUBG Mobile game. The list of 8 ranks ranging from lowest to the highest are –

In this tier, there are 5 sub ranks. These are, Bronze I, Bronze II, Bronze III, Bronze IV, and Bronze V. To jump on to the Silver rank, you have to pass through from all these ranks.

You need 1200+ total ratings to reach the Bronze tier.

In this Silver-tier, there are 5 sub ranks. These are, Silver I, Silver II, Silver III, Silver IV, and Silver V. To jump on to the Gold rank, you have to pass through from all these ranks.

You need 1700+ total ratings to reach the Silver tier.

In this Gold tier, there are 5 sub ranks. These are, Gold I, Gold II, Gold III, Gold IV, and Gold V. To jump on to the Platinum rank, you have to pass through from all these ranks.

You need 2200+ total ratings to reach the Gold tier.

You need 2700 + total ratings to reach the Platinum tier.

In this tier, there are 5 sub ranks. These are, Diamond I, Diamond II, Diamond III, Diamond IV, and Diamond V. To jump on to the Crown rank, you have to pass through from all these ranks. The reward in this tier is unique Gun skins in every season.

You need 3200+ total ratings to reach the Diamond tier.

In this tier, there are 5 sub ranks. These are, Crown I, Crown II, Crown III, Crown IV, and Crown V. To jump on to the Ace rank, you have to pass through from all these ranks. Till Season 7 of the game, players have got Gun skin. The reward changes every season.

You need 3700+ total ratings to reach the Crown tier.

Players who have achieved this rank get Parachute skin. Though not such a big reward but the title is what drives your crazy. You can set ‘Season 7 Ace’ as your title and it will be displayed on the plane.

You need 4200+ total ratings to reach the Ace tier.

This is the highest and toughest title to conquer, hence the ‘Conquerer’. The top 500 players in the server will achieve this rank.

Bronze is the lowest rank which has 5 sub-ranks into it. Illustratively, Bronze I, Bronze II, Bronze III, Bronze IV, and Bronze V. So, it starts with Bronze V to Bronze I and then Silver V to Silver I, and so on. The highest rank is ‘Conquerer’. The top-level of Conquerer is reserved for top 500 players per server who have reached the rank ‘Ace’.

The ranking system in the PUBG game is Season Wise. The rank resets, usually goes down, when the player enters into a new season. Every new season of the game brings multiple updates and features for you but the thing that bothers all the PUBG lovers is ranking reset system. In all the modes of PUBG game – be it Solo, Squad, or Duo, ranking resets.

Not just the ranks but RPs (Rating Points) also resets in new seasons. For pushing the rankings up and collecting points, players take part in daily and weekly missions. It’s, therefore, crystal clear that the rankings in PUBG mobile games and points are all season-wise. So, if a player is good in one season, it doesn’t mean that he will be having good rankings in all the seasons. Even, Elite Pass will not be valid in new seasons.

How Do You Increase Your Rank?

To showcase your gaming skills, your rankings are a major parameter that other PUBG players will see about you. Hence, it is crucial to work upon increasing the rankings in the game alongside jumping into the levels. Now, there’re two things – Ranks and Rating Points. 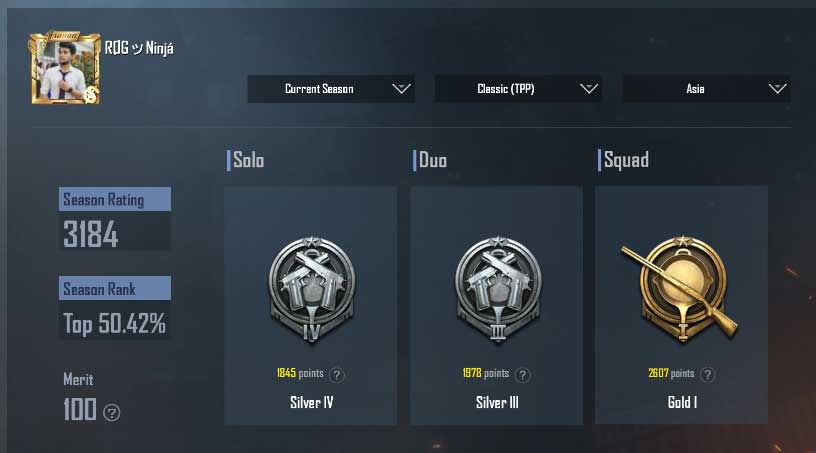 What Rewards Do You Earn For Higher Rankings?

As you have read above that for different PUBG Mode the rankings will be separate, So, if you are pro in playing in any particular mode of PUBG Mobile game, you can’t take a lead in the rankings. You have to excel in playing all types of Modes be it Solo, Duo, or Squad.

You get the rewards crate by the end of the season, which will expire after a period of four months. What you will get in the crate will all depend on your highest ranking in any variation of the game. So, it would be great if you dabbled in many skills. You will be paid off at the end of the season in the form of ‘Rewards’.