Everyone enjoys music, regardless of their preferences. Hiking, walking, painting, and reading without music is meaningless. No one wants to put in the effort of downloading and syncing their smartphones for offline listening.

As a result, the majority of us choose to use third-party applications to listen to online music. you don’t necessarily have an internet connection always.  Is that correct? You don’t have to download songs from suspicious sites solely for offline listening. Not to mention, the stress of synchronizing your mobile device.

We have a solution for you, here are 15 apps that could be used to listen to music when you are offline. 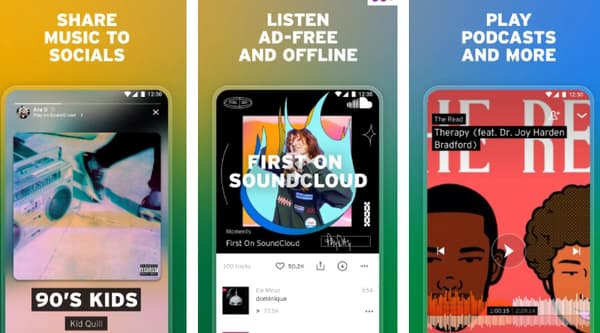 With 175 million monthly active listeners, SoundCloud is the largest online music streaming network. Featuring nearly half of the world’s biggest brands. There is almost never a music track that is not available here. People adore this website, which has 40 million registered users. SoundCloud provides smartphone apps for Android, iOS, and other devices. There are numerous applications available on the Google Play store that allow you to stream free music without using WiFi. 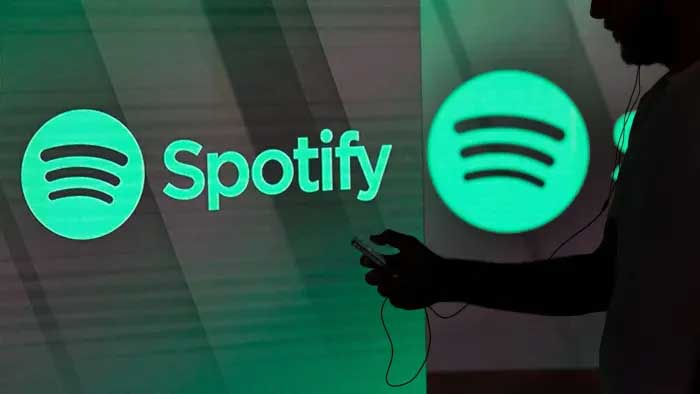 Despite the increasing rivalry, Spotify remains the big shot and greatest free music service without WiFi. It’s the simplest and the most effective music service out there. This music listening service also supports podcasts and downloadable comics. Spotify’s popularity has not diminished as a result of its sources, which provide a secure, intuitive experience with a multitude of options.

You will have up to 3,333 tracks in your offline playlist if you have a Spotify premium account. Although a free account allows you to build 15 playlists of up to 750 tracks in total, there is no offline listening. 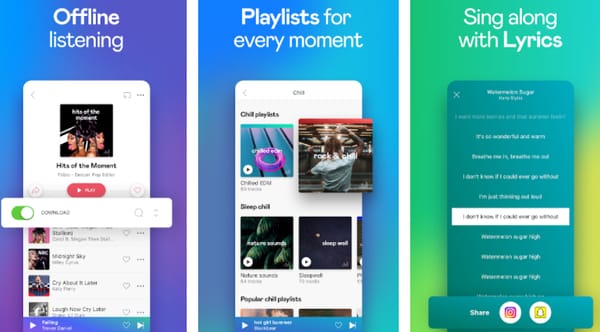 Deezer is a free music download app including over 53 million tracks available. That covers a wide range of singers from various genres. Deezer is accessible in 182 countries, with just 10 countries remaining around the world. This app is double the size of Apple Music and Google Play Music in terms of songs and global coverage. One thing to keep in mind is that not all of Deezer’s features are available in every country. 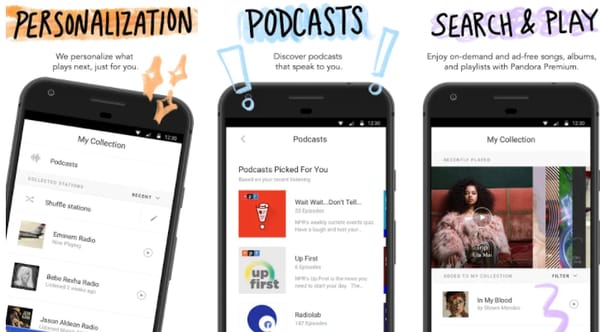 This is a music industry leader that provides millions of music tracks. Pandora functions much as a music portal, allowing artists and music fans to engage with one another. Using this app, exploring different things to listen to is a whole new level of fun. Sadly, this app is only available in America. Pandora also helps users to build playlists of music tracks they want to listen to again and again. These are referred to as “stations.” 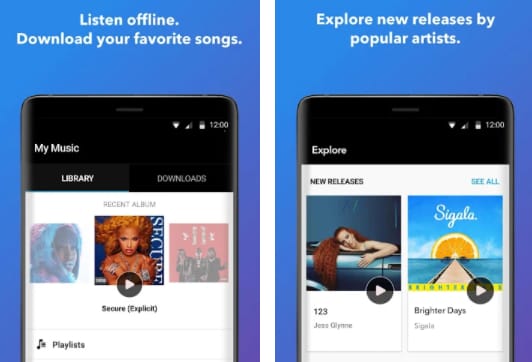 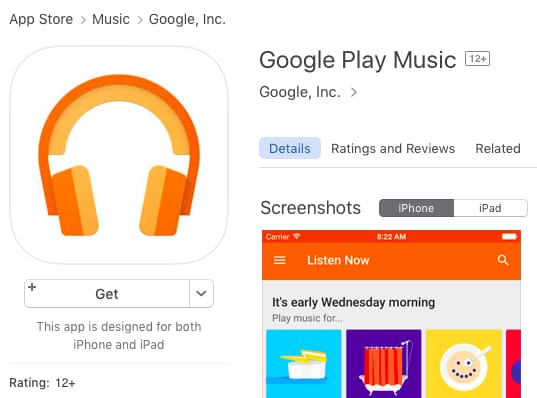 Android phones come with the Google Play offline Music service pre-installed. It debuted in 2011 as Google’s music streaming service. This app allows users to upload up to 50,000 of their own tracks. All these songs will then be added to their library and made available for streaming. This is an excellent way to store your personal collection without filling up valuable storage space on your device.

Jeff Bezos’ Amazon began as a bookselling online store, but it is no longer just for books. It is now doing really great in the digital media and film industries as well. One of their products in this category is Amazon Prime Video and Amazon Music Unlimited. Millions of song tracks and lyrics compositions are available in their music library. This provides you with a wide variety of options.

This is a premium app from Apple, the tech giant. Users can choose to have music streamed to their smartphone on requests, or they can refer to pre-made, selected playlists. Apple Music has millions of tracks to listen to. You will trial 3 months of music for free before beginning a paid subscription to this service. Apple’s application not only supports audio, but it also provides video.

The Gaana app, which has approximately 7 billion users, is the most popular Bollywood music app. It also streams in English, but its primary focus is on Indian songs. On this app, you can listen to the new music from all of your favorite Bollywood films. Their material isn’t limited to music songs. This app also allows you to listen to stories, podcasts, and other audio content. You can create your own playlists or listen to pre-made playlists created by them and other users. This offline music download app is initially free, but it contains advertisements and does not allow for downloads.

This is a free legal offline music application that allows you to listen to an infinite number of tracks. It is also one of the best music applications that do not use Wifi to operate in offline mode. This is sort like a music community where you can discover new music and engage with other music fans. You get suggestions for other similar songs available based on your listenings and likes. This application imports music tracks from SoundCloud and other online music services. You’d love it if you could listen to music without needing to connect to the internet.

TIDAL is a high-fidelity music streaming service that helps you to listen to millions of songs, create playlists, and share them with friends. This application lets for the streaming of live concerts, some of which have exclusive rights. You can create custom playback lists as well as share them with friends via social networking sites as well. TIDAL is a music lover’s wish for those who want CD-Quality audio of their favorite songs.

Slacker Radio is a music streaming service that lets you develop your own radio stations. You will make your own playlists depending on your favourite artists and genres of music. This app’s sound quality is also excellent. Using this Radio app, you can quickly listen to your favourite station playing music that you like. This app also has a like or dislike option, which helps Slacker Radio to learn about the music you like listening to.

Saavn is a free music app that mainly features Bollywood music, which you can listen to according to your mood or the artist/genre you like. This application, like all of its rivals, has a bitrate of 320KBPs. Playlists allow you to arrange and compile your favorite music tracks and artists. The way they curate the music is the app’s most amazing aspect.

For music fans, Shazam is another popular free music app that works without WiFi. This app allows you to explore new music from around the world.  If you listen to music while shopping, driving, or riding the train, you are not required to write about the lyrics. Simply Shazam it, and it will take care of the rest.